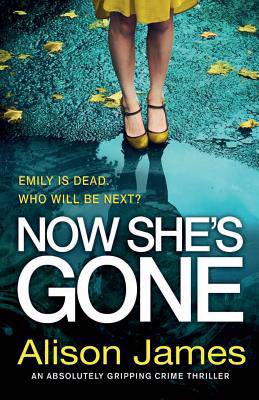 She took a mouthful of the sweet liquid and started to feel a pounding in her head. Arms went around her waist and she was half lifted and half pulled. The last thing she was aware of was her head hitting a step...

Sixteen-year-old Emily had everything to live for. A bright, beautiful teenager with a promising future ahead of her. But in one night her life is cut short. The police say it's an accident. But her parents think she was murdered.

When Detective Rachel Prince is called in to investigate the shocking death at the height of the Edinburgh festival, her instincts tell her that things are not as they first appear. Something is very wrong.

As the case takes an unexpected turn, Rachel discovers a chilling link with the suspicious death of another international student, who stayed in the same house as Emily two years before.

Just as Rachel finds herself on the hunt for a serial killer, a painful relationship from her own past catches up with her. And Rachel must decide what is more important - catching the killer or keeping her own secrets?

What readers are saying about the Detective Rachel Prince series:

'I was hooked from page one and couldn't put it down until I'd reached the end. The twists and turns just keep coming... will have you gasping in surprise.' Goodreads Reviewer, 5 stars

'I held my breath all the way through, wanting, yet not wanting to know the outcome. Spectacular read.' Goodreads Reviewer, 5 stars

'One of the BEST police procedural thrillers that I have read lately. From the start to the finish, it gripped and held me tight... I can't wait to see more of Rachel Prince.' The Book Nurse, 5 stars

'Had me on the edge of my seat from start to finish. Jam packed with twists and turns... If you love crime and are as addicted to police procedurals as I am you will love this book!!!'Goodreads Reviewer, 5 stars

'Captivated from the first page... plenty of twists and turns... dramatic, stomach wrenching... This book was an awesome start to a new series, I can't wait for the next instalment!' Bonnie's Book Talk

'Omg what a read... I had a few ideas as to what happened... But nothing prepared me for that. Wow. I was shocked. 5 stars!Highly recommended.' Sue Wallace Site, 5 stars